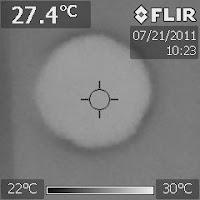 I have blogged about some intriguing IR images when a piece of paper is placed on top of a cup of water. The part of paper above the water warms up (Figure 1) because of the release of latent heat of condensation of water vapor to its underside. If you want to reproduce this effect, note that the shallow the cup, the more pronounced the effect (I used a lid and turned it over to use as a shallow cup). 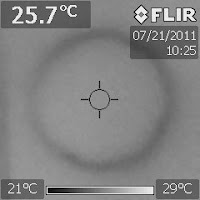 In these IR images, I chose the gray coloring mode. So white represents the hottest and black the coldest.
The warming stops after a minute because the condensate layer reaches the maximal thickness due to the dynamic equilibrium of condensation and evaporation. So we see there is no difference of temperature across the paper any more (see Figure 2). (Well, except for the ring area that touches the edge of the cup, in which it gets the temperature of the cup.) 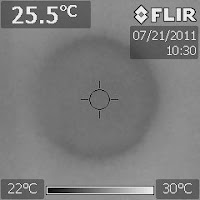 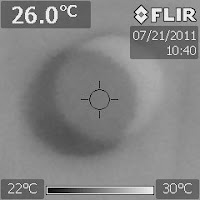 If we leave the paper for a couple more minutes, the part of paper actually becomes cooler (Figure 3). So what is going on? 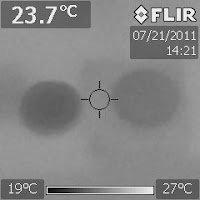 This follow-up study shows that even a humble experiment like placing a piece of paper atop water has many surprises that reveal the richness of science, which all become transparent under an IR camera. I will blog more surprises derived from this experiment later.