About four years ago, I dreamed about how multicore computing could push educational computing into a high-performance era. It turns out that the progress in multicore computing has been slow. The computer I am using to write this blog post has four physical cores that support eight virtualized cores, but I don't feel it is dramatically faster than my previous one bought more than six years ago. Worse, it feels much slower than my new Thinkpad tablet, which is powered by a recent I7 dual-core processor. The fact that a dual-core Intel CPU beats a quad-core Intel CPU suggests something must be wrong in the multicore business.

Before the real promise of multicore computing arrives in my computers, two other things have changed the landscape of personal parallel computing. The first is general-purpose computing on graphics processing units (GPGPU), which uses hundreds of GPU processors in a graphics card to perform some calculations traditionally done in CPUs. OpenCL and CUDA are currently two frameworks that support developers to write parallel code to leverage the GPU power (or the power of hybrid CPU/GPU).

The second is cloud computing. Public clouds provide access to thousands of processors. IT companies have developed cutting-edge technologies that make modern search engines so fast. Can they be used to accelerate scientific simulations on your tablets? The Magellan Report on Cloud Computing for Science published by the U.S. Department of Energy last year provides some perspectives from the science community. Cloud gaming provides some complementary perspectives from the game industry. Putting these insights together, I think there is an opportunity here for educational technology developers who want to deliver killer animations for digital textbooks or online courses. After all, like games, the competition in the education media market will eventually be driven by the quality of animations. And when it comes to animations, high quality usually means realistic details and fast renderings.

GPGPU and cloud computing represent a departure from multicore computing to many-core computing. Regardless of what the future of computing will be, parallel computing is not optional -- it is inevitable. Educational technology can benefit from this wave of paradigm shift if we take actions now.
Posted by Charles Xie at 1:16 PM No comments: 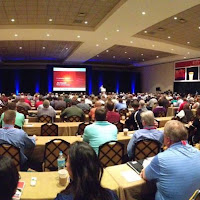 Orlando is the center of the thermal imaging universe in November 6-8 when it hosts the largest infrared imaging conference in the world: InfraMation. Invited by FLIR Systems, I gave a Keynote Speech on the educational applications of IR imaging in this morning's Opening Plenary and I felt that it was very well received. The PEPSI joke about how to use an IR camera to produce a PEPSI logo (see the second image in this post) was a hit. Everyone laughed.

Here is the link to download my slides in PDF format (34MB). 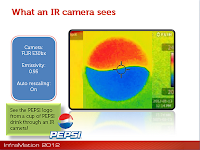 Once again, I was thrilled by the power of IR imaging and how this kind of technology can knock down the barrier between disciplines.Even if we are an educational technology firm with a primary mission to teach science, we are in no place to be humble because the science we are seeing through our IR cameras is exactly the same as the science the industry folks are seeing through theirs. Our original discoveries, intended to teach students science concepts, were equally recognized by world leaders in IR imaging technologies such as Prof. Dr. Michael Vollmer from the University of Applied Sciences in Brandenburg, Germany in their publication intended for researchers and professionals. With cutting-edge and yet easy-to-use technologies like IR imaging, the line between research and education is never so blurry. This ought to get science educators to think about the possibilities opened up by new technologies. We keep hearing some educators pushing back by asserting that children are not scientists and cannot think or act like scientists. This kind of argument largely neglects the advancement of technology and throws away the opportunities they bring along. It is time for a change, at least a try.
Posted by Charles Xie at 2:55 PM 2 comments: