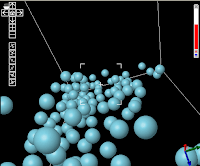 Another advantage of a computer simulation is that it can be easily embedded into an electronic textbook (which recently becomes the trend due to budget crises in many states in the US). Obviously, embedding a bottle of water into an electronic textbook is much harder, if not impossible at all (I would never say that is impossible). With the support of this kind of interactive simulation, future textbooks will not be just some readable things. They will be playable delights.
Posted by Charles Xie at 9:13 PM No comments:

The educational software market is largely dominated by cartoon movies, animations, and games. Developing these media usually requires no rocket science (i.e., sophisticated mathematics and computation in the context of this blog). But this may change soon in the field of science education, enlightened by the success of some applications that will be discussed below.

A strand of mechanical simulation programs started with Interactive Physics back in the 90s and significantly advanced by the recently released Phun and Crayon Physics have demonstrated great educational potential. These impressive programs allow users to draw a variety of shapes, which then move realistically on the screen: they fall, slide, roll, and bump into each other--just like objects in the real world they model do. These programs have a user interface that is very friendly to novices, especially with a freehand drawing tool connected to a digital pen. With only a handful of tools, users can create many interesting simulations. Experienced users can build simulations as sophisticated as a vehicle impact test and a hovercraft takeoff. As a matter of fact, what users can create is limited only by their imagination.

There is no doubt that these tools truly motivate students, unleash their creativity, and make learning physics unprecedentedly enjoyable. But the important thing is that all these would not have been possible without using computational physics. The reason that these tools model the real world so well is because the motions of objects are calculated using Newtonian dynamics--to be more precise, using a computational method commonly known as the multibody dynamics. In fact, Phun uses a computational engine called SPOOK developed by Dr. Claude Lacoursière, and Crayon Physics uses a similar one called Box2D developed by Dr. Erin Catto. These multibody dynamics engines simulate interconnected bodies with contacts, joints, constraints, dry friction, and power input/output. SPOOK even supports multiphysics simulations by integrating the multibody dynamics for modeling rigid bodies with the smoothed particle hydrodynamics for modeling fluids.

The multibody dynamics method comes from rocket science--it is used in industry to model robots, vehicles, and aircraft. It was, however, not intentionally developed for use in education. The generations of computational scientists who developed the method presumably did not anticipate that one day the method would find its use in hundreds of thousands of middle schools and high schools. By the time I was blogging about this, the simulations run in classrooms may have far exceeded those run for research--by any standard.

What does this teach us?

The first lesson we learned is that computational science is not a privilege of some scientists in ivory towers any more. In fact, science education and scientific research share a common goal: to understand how things work. It is, therefore, not surprising that a research tool like the multibody dynamics can be so successfully converted into an effective learning tool. I would further contend that the only correct way to develop an educational tool would be to use the first principles in the corresponding domain of science as much as possible. The initial investment on such a tool may be high (e.g., it needs dedicated computational scientists such as Drs. Lacoursière and Catto, as well as brilliant programmers such as the authors of Phun and Crayon Physics), but the payback will be more powerful, generic software that can last for a long time.

In my opinion, the single most important advantage of using first principles to build an educational tool is that the power of creation and prediction embodied in these scientific principles will be given to students. What else is more important in education than giving students the power developed by the most intelligent individuals of the entire human race in decades or hundreds of years, now that we have a wonderful way of delivering it through computing?

Unfortunately, this advantage is often underappreciated by many educators who do not fully realize the potential of this approach. The vision that the well-advocated cyberinfrastructure should include smart media powered by first principles is not widely shared. Using science to build interactive science media is not part of the design guidelines of mainstream educational media. Applications such as Phun and Crayon Physics are still scarce. There are many more domains of science and engineering that need to be covered.

But there is hope. Outside education, game developers have adopted first principles far earlier. Games need to have realistic look-and-feels in order to be competitive in the market. Major graphics libraries already provide excellent lighting functions. Realistic motion of objects powered by physics engines and projected grid engine for rendering water are now not uncommon in games. Phun and Crayon Physics, despite their great educational power, are billed as games but not educational tools. Perhaps, the breeze from the gaming world into the educational world will slowly transform the way people think of educational media and changes will then occur naturally. What would schools be when they are equipped with tools powered by rocket science?
Posted by Charles Xie at 4:07 PM 2 comments: