Energy3D already provides a set of powerful analysis tools that users can use to analyze the annual energy performance of their designs. For experts, the annual analysis tools are convenient as they can quickly evaluate their designs based on the results. For novices who are trying to understand how the energy graphs are calculated (or skeptics who are not sure whether they should trust the results), the annual analysis is sometimes a bit like a black box. This is because if there are too many variables (which, in this case, are seasonal changes of solar radiation and weather) to deal with at once, we will be overwhelmed. The total energy data are the results of two astronomic cycles: the daily cycle (caused by the spin of the Earth itself) and the annual cycle (caused by the rotation of the Earth around the Sun). This is why novices have a hard time reasoning with the results.

To help users reduce one layer of complexity and make sense of the energy data calculated in Energy3D simulations, a new class of daily analysis tools has been added to Energy3D. These tools allow users to pick a day to do the energy analyses, limiting the graphs to the daily cycle.

For example, we can place three sensors on the east, south, and west sides of the house shown in Figure 1. Then we can pick four days -- January 1st, April 1st, July 1st, and October 1st -- to represent the four seasons. Then we run a simulation for each day to collect the corresponding sensor data. The results are shown in Figure 2. These show that in the winter, the south-facing side receives the highest intensity of solar radiation, compared with the east and west-facing sides. In the summer, however, it is the east and west-facing sides that receive the highest intensity of solar radiation. In the spring and fall, the peak intensities of the three sides are comparable but they peak at different times.

If you take a more careful look at Figure 2, you will notice that, while the radiation intensity on the south-facing side always peaks at noon, those on the east and west-facing sides generally go through a seasonal shift. In the summer, the peak of radiation intensity occurs around 8 am on the east-facing side and around 4 pm on the west-facing side, respectively. In the winter, these peaks occur around 9 am and 2 pm, respectively. This difference is due to the shorter day in the winter and the lower position of the Sun in the sky.

Energy3D also provides a heliodon to visualize the solar path on any given day, which you can use to examine the angle of the sun and the length of the day. If you want to visually evaluate solar radiation on a site, it is best to combine the sensor and the heliodon.

You can also analyze the daily energy use and production. Figure 3 shows the results. Since this house has a lot of south-facing windows that have a Solar Heat Gain Coefficient of 80%, the solar energy is actually enough to keep the house warm (you may notice that your heater runs less frequently in the middle of a sunny winter day if you have a large south-facing window). But the downside is that it also requires a lot of energy to cool the house in the summer. Also note the interesting energy pattern for July 1st -- there are two smaller peaks of solar radiation in the morning and afternoon. Why? I will leave that answer to you.
Posted by Charles Xie at 8:19 PM 2 comments: 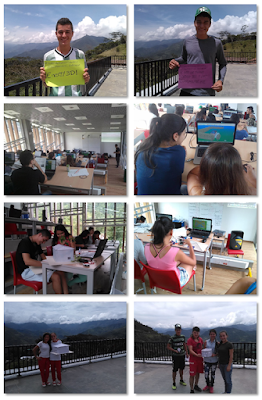 Camilo Vieira Mejia, a PhD student of Purdue University, recently brought our Energy3D software to a workshop, which is a part of Clubes de Ciencia -- an initiative where graduate students go to Colombia and share science and engineering concepts with high school students from small towns around Antioquia (a state of Colombia). 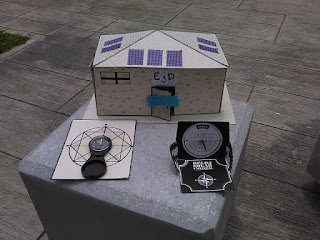 Students designed houses with Energy3D, printed them out, assemble them, and put them under the Sun to test their solar gains. They probably have also run the solar and thermal analyses for their virtual houses.

We are glad that our free software is reaching out to students in these rural areas and helping them to become interested in science and engineering. This is one of the many examples that a project funded by the National Science Foundation also turns out to benefit people in other countries and impact the world in many positive ways. In this sense, the National Science Foundation is not just a federal agency -- it is a global agency.

If you are also using Energy3D in your country, please consider contacting us and sharing your stories or thoughts.

Energy3D is intended to be global -- It currently includes weather data from 220 locations in all the continents. Please let us know you would like to include locations in your country in the software so that you can design energy solutions for your own area. As a matter of fact, this was exactly what Camilo asked me to do before he headed for Colombia. I would have had no clue which towns in Colombia should be added and where I could retrieve their weather data (which is often in a foreign language).

[With the kind permission of these participating students, we are able to release the photos in this blog post.]
Posted by Charles Xie at 10:20 PM No comments:

The ground temperature has a variation pattern different from that of the air temperature. You may experience this difference when you walk into the basement of a house from the outside in the summer or in the winter at different times of the day.

For our Energy3D CAD software to account for the heat transfer between a building and the ground at any time of a year at the 220 worldwide locations that it currently supports, we must develop a physical model for geothermal energy. While there is an abundance of weather data, we found very little ground data (ground data are, understandably, more difficult and expensive to collect). In the absence of real-world data, we have to rely on mathematical modeling.

This mission was accomplished in Version 4.9.3 of Energy3D, which can now simulate the heat transfer with the ground. This geothermal model also opens up the possibility to simulate ground source heat pumps -- a promising clean energy solution, in Energy3D (which aims to ultimately include various renewable energy sources in its design capacity to support energy engineering).

Exactly how the math works can be found in the User Guide. In this blog post, I will show you some results. Figure 1 shows the daily averages of the air and ground temperatures throughout the year in Boston, MA. There are two notable features of this graph: 1) Going more deeply, the temperature fluctuation decreases and eventually diminishes at six meters; and 2) the peaks of the ground temperatures lag behind that of the air temperature, due to the heat capacity of the ground (the ground absorbs a lot of thermal energy in the summer and slowly releases them as the air cools in the fall).

Figure 4 shows four snapshots of the heat transfer between a house and the ground at four different times (12 am, 6 am, 12 pm, and 6 pm) on January 1. The figure shows arrays of heat flux vectors that represent the direction and magnitude of heat flow. To exaggerate the visualization, the R-values of the floor insulation and the windows were deliberately set to be low. If you observe carefully, you will find that the change in the magnitude of the heat flux vectors into the ground lags behind that of those into the air.

The geothermal model also includes parameters that allow users to choose the physical properties of the ground, such as thermal diffusivity. For example, Dry land tends to have smaller thermal diffusivity than wet land. With these properties, geology also becomes a design factor, making the already interdisciplinary Energy3D software even more so.
Posted by Charles Xie at 5:40 PM No comments: