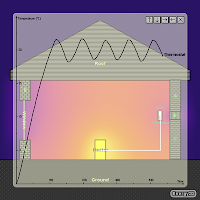 A thermostat is a controller that maintains a system's temperature near a fixed point. The simplest thermostat does this by switching a heater or AC on and off to maintain the desired temperature (known as the bang-bang control). I spent a couple of days adding thermostats to Energy2D and developing a simple GUI for setting up thermostats. 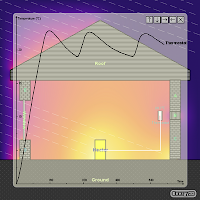 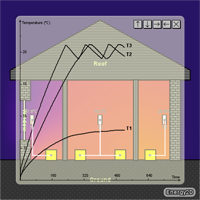 You should discover from this simulation that, when the sun shines on the house, it ends up using less energy to maintain the inside temperature because the time that the heater is on is shorter (see the differences of the two graphs in the first two images of this post). You should also find out why we should not put the sensor of a thermostat near a window.

The third image shows multiple thermostats at work to create different heating zones. This Energy2D simulation has four heaters in three rooms, each of which is controlled by a thermostat.

From these demos of thermostats in Energy2D, you can see the richness of the software. I will add more useful features like this to make Energy2D even better. Stay tuned!
Posted by Charles Xie at 11:43 PM 1 comment:

Energy2D is our signature software for heat transfer and fluid dynamics simulations. Written in Java, it runs speedily either as a standalone app on your desktop or an embedded applet within a browser. It is actively being developed to meet the need of energy education to have an interactive and constructive learning environment based on rigorous scientific principles. Energy2D is already a highly interactive system--you can change anything that is allowed to change by the author of a simulation while it is running. Recently, I have added two new features to make it even more interactive. Both features apply to all existing Energy2D simulations I (or you) have created.

The first one is a "heat dropper," a mode in which the user can click or drag the mouse to add or remove heat from the location in the model that the mouse points to. If you have a touch screen, you can touch or swipe your finger across it and the heat dropper works as if your finger could give heat to the virtual space in the simulation. The first video in this blog post shows how it works.

The second one is a "field reader," a mode in which the user can move the mouse to read the value of a property distribution field at the location the mouse points to. Currently, the supported property fields include temperature, thermal energy, and fluid velocity (which will be zero in a solid). The second video shows how it works.

If a web page that embeds an Energy2D applet doesn't already have a drop-down menu on the page for you to switch to these modes, you can always access them through the View Options dialog window. The View Options menu can be found if you right-click on a spot in the simulation window that is not occupied by a model component (like a polygon or a sensor).
Posted by Charles Xie at 10:32 PM No comments:

The Molecular Workbench software has been widely used in middle and high schools. It is relatively unknown that many colleges and universities around the world use it in their classrooms as well. 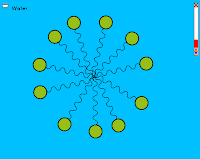 Recently, the software was used in the Summer School in the Systems Biology of Neurodegenerative Disease offered by the Ottawa Institute of Systems Biology. Students in this Summer School learned about the basics of molecular dynamics simulations using tools including our "intuitive" Molecular Workbench. They then applied their new knowledge to either model and simulate bilayer membranes made of various lipid species or strictly model a lipid using three different approaches. 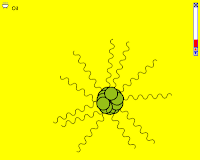 For the Molecular Workbench, we have developed a set of unique simulation techniques that can render a dynamic cartoon view of biomolecular processes that are usually too complicated to show all the fine details (see the images to the right for a cartoonized simulation of micelle formation in water and oil, respectively). This capability turns what used to be static illustrations in a biology textbook dynamic and interactive and provide opportunities of exploration to students. This is the key why the coarse-grain modeling techniques developed for MW based on soft body dynamics and particle dynamics looks so promising for the current wave of digitization of chemistry and biology textbooks.
Posted by Charles Xie at 12:58 PM No comments: 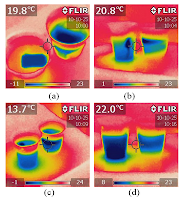 Note that these videos do not represent any political view and should not be considered as in support of any agenda, my purpose is only to provide a humble scientific demonstration to prove that things do not always go smoothly as we wish.
Posted by Charles Xie at 6:19 PM No comments:

Jesper Haglund from Linköping University presents a poster about our Sweden-US collaborative research on thermal visualization at the 2012 World Conference on Physics Education held in Istanbul, Turkey. Below is the abstract of the poster:

"Infrared (IR) thermal imaging is a powerful technology which holds the pedagogical potential of ‘making the invisible visible’, and is becoming increasingly affordable for use in educational contexts. Science education research has identified many challenges and misconceptions related to students’ learning of thermodynamics, including disambiguation of temperature and heat, and a common belief that our sense of touch is an infallible thermometer. The purpose of the present study was to explore how thermal imaging technology might influence students’ conceptual understanding of heat and temperature. This was carried out by investigating three different conditions with respect to students exploration of the thermal phenomena of different objects (e.g. wood, metal and wool), namely the effect of students’ use of real-time imaging generated from a FLIR i3 IR camera, students’ interpretation of static IR images, and students’ deployment of traditional thermometer apparatus. Eight 7th-grade students (12-13 years old) worked in pairs across the three experimental conditions, and were asked to predict, observe and explain (POE) the temperature of a sheet-metal knife and a piece of wood before, during and after placing them in contact with their thumbs. The participants had not been exposed to any formal teaching of thermodynamics and the ambition was to establish if they could discover and conceptualise the thermal interaction between their thumbs and the objects in terms of heat flow with minimal guidance from the researchers. The main finding was that a cognitive conflict was induced in all three conditions, as to the anomaly between perceived ‘hotness’ and measured temperature, with a particular emotional undertone in the real-time IR condition. However, none of the participants conceptualised the situation in terms of a heat flow. From the perspective of establishing a baseline of the understanding of thermal phenomena prior to teaching, extensive quantities, e.g. ‘heat’ or ‘energy’, were largely missing in the participants’ communication. In conclusion, although an unguided discovery or inquiry-based approach induced a cognitive conflict, it was not sufficient for adjusting the students’ conceptual ecologies with respect to the age group studied here. Future research will exploit the promise of the cognitive conflict observed in this study by developing a more guided approach to teaching thermal phenomena that also takes full advantage of the enhanced vision offered by the thermal camera technology."

If you don't know what thermal visualization is, visit our InfraredTube website.
Posted by Charles Xie at 9:04 AM No comments: