Water permeation across paper and colors under the sun 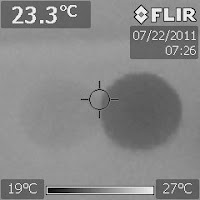 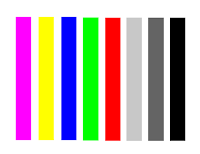 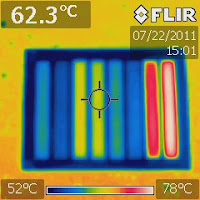 Last October, I blogged about visualizing different colors' ability to absorb light. In that experiment, I used a table lamp as the light source. Later, I realized a flaw in that experiment because a table lamp is, after all, a point source. For the color bars to have equal illumination, we need a light source that is far far way. The sun is such a light source. So I brought the color plate outside and put it under the sun. You can now have a better idea of which color is more capable of absorbing heat. No doubt black won. To my surprise, purple and yellow have approximately the same light absorptivity. So do blue and green. Red, on the other hand, absorbed about the same amount of light as light gray. The background is white. It absorbed the least amount of light energy and appeared to be bluest in the IR image. Amazingly, paper doesn't conduct heat well, otherwise the color bars in the IR image would not have been so well separated.
Posted by Charles Xie at 7:54 AM