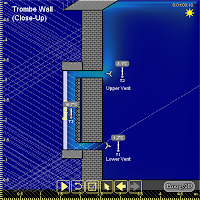 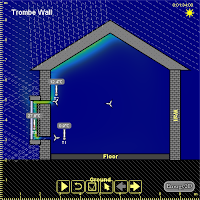 A Trombe wall is a sun-facing wall separated from the outdoors by glass and an air space. It consists a solar absorber (such as a dark surface) and two vents for air in the house to circulate through the space and carry the solar heat to warm the house up. In a way, a Trombe wall is like a machine that uses air as a convey belt of thermal energy harvested from the sun. Trombe walls are very simple and easy to make and are sometimes used in passive solar green buildings.


Hiding sophisticated power of computational fluid dynamics behind a simple graphical user interface, our Energy2D software can easily simulate how a Trombe wall works. The two images in this blog post show screenshots of a Trombe wall simulation and its closeup version. You can play the simulation on this page and download the models there. If you open the models using Energy2D, you should be able to see how easy it is to tweak the models and create realistic heat flow simulations.

Solar chimneys operate based on similar principles. Energy2D should be able to simulate solar chimneys as well. Perhaps this would be a good challenge to you. (I will post a solar chimney simulation later if I figure out how to do it.)
Posted by Charles Xie at 9:56 PM No comments:

In his Critique of Pure Reason, the Enlightenment philosopher Immanuel Kant asserted that “conception without perception is empty, perception without conception is blind. The understanding can intuit nothing, the senses can think nothing. Only through their unison can knowledge arise.” More than 200 years later, his wisdom is still enlightening our NSF-funded Mixed-Reality Labs project.

Mixed reality (more commonly known as augmented reality) refers to the blending of real and virtual worlds to create new environments where physical and digital objects co-exist and interact in real time to provide user experiences that are impossible in only real or virtual world. Mixed reality provides a perfect technology to promote the unison of perception and conception. Perception happens in the real world, whereas conception can be enhanced by the virtual world. Knitting the real and virtual worlds together, we can build a pathway that leads perceptual experiences to conceptual development. 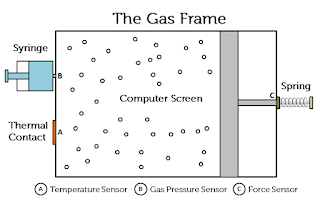 Pilot tests of the Gas Frame will begin at Concord-Carlisle High School this week and, collaborating with our project partners Drs. Jennie Chiu and Jie Chao at the University of Virginia, unfold at several middle schools in Virginia shortly. Through the planned sequence of studies, we hope to understand the cognitive aspects of mixed reality, especially on whether perceptual changes can lead to conceptual changes in this particular kind of setup.

Acknowledgements: My colleague Ed Hazzard made a beautiful wood prototype of the Frame (in which we can hide the messy wires and sensor parts). The current version of the Gas Frame uses Vernier's sensors and a Java API to their sensors developed primarily by Scott Cytacki. This work is made possible by the National Science Foundation.
Posted by Charles Xie at 10:48 AM No comments:

A petition for Java to Oracle from more than 15,000 people

Java is a programming language used by millions of developers and a software platform used by hundreds of millions of users. It has been one of the top three computer languages since it was born. More recently, it has become the sole language for creating Android apps and its adoption is exploding in mobile computing as the Android market grows: As of October 2012, there have been over 700,000 apps in the Android Market, rivaling (and expected to surpass) the number of apps in the Apple Store (see a Financial Times report in December 2012).

Java has become a community asset, not a tool for making money to pay for someone's islands and yachts. Unfortunately, its original creator, Sun Microsystems, has gone out of business. Its current owner, Oracle Corporation, decided that it can make a few pennies from each user by turning the Java installer into a piece of foistware that gives users unwanted software such as the Ask Toolbar. This action effectively jeopardizes an excellent computer technology like Java by lowering it to the same level of notorious adware that nobody wants.

My colleague Saeid Nourian has started a change.org petition to ask Oracle to stop this bundling. In about a week, more than 10,000 people from all over the world have signed the petition. The goal of the petition, however, is to collect 250,000 signatures.
Posted by Charles Xie at 9:00 PM No comments: