A parabolic trough is a type of concentrated solar collector that is straight in one dimension and curved as a parabola in the other two, lined with mirrors. Sunlight that enters the trough is focused on an absorber tube aligned along the focal line of the parabola, heating up the fluid in the tube (Figures 1 and 2). If the parabolic trough is for generating electricity, the heated fluid is then used to vaporize water and drive a turbine engine. A power plant usually consists of many rows of parabolic troughs.

Parabolic troughs are another common form of concentrated solar power (CSP), in addition to solar power towers that Energy3D has already supported (there are two other types of CSP technologies: Dish Stirling and Fresnel reflectors, but they are not very common). According to Wikipedia, there are currently more parabolic trough-based CSP plants than tower-based ones.

In the latest version of Energy3D (V7.0.6), users can now add any number of parabolic troughs of any shape and size to design a solar thermal power plant.


Parabolic troughs are most commonly aligned in the north-south axis so that they can rotate to track the sun from east to west during the day. This kind of trackers for parabolic troughs works in a way similar to the horizontal single-axis tracker (HSAT) for driving photovoltaic solar panel arrays. You can observe their motions when you change the time or date or animate the movement of the sun in Energy3D. Figure 3 illustrates this.

This new addition greatly enhances Energy3D's capability of modeling CSP plants, moving the software closer to the goal of being a one-stop shop for exploring all sorts of solar solutions. In the coming weeks, we will start to build 3D models for parabolic troughs in the real world.

Posted by Charles Xie at 3:09 PM No comments: 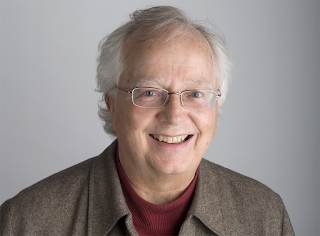 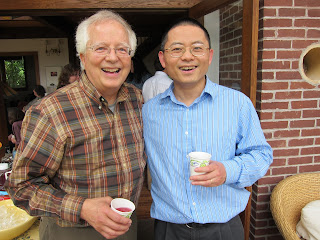 Bob's vision about STEM education always put innovation first. He had transcribed the DNA of innovation into the Concord Consortium. His spirit had translated into a culture of innovation that is driving our research and development. With many new emerging technologies, the future ahead of us is full of exciting opportunities. With the combined power and promise of the Internet of Things (IoT), artificial intelligence (AI), and mixed reality (VR/AR/MR), the next decade will undoubtedly bring a new wave of innovation to propel STEM education to a higher level. As a pioneer of probeware for science education who completely understood the pivotal importance of sensors in IoT systems and embedded intelligence, Bob would have been thrilled to set out to explore these new territories with us.
Posted by Charles Xie at 3:56 PM 1 comment:

Khi Solar One (KSO) is a 50 MW solar power tower plant located in Upington, South Africa, which was commissioned in February, 2016. KSO has 4,120 heliostats on 346 acres of land. Each heliostat is as large as 140 square meters, reflecting sunlight to a tower as tall as 205 meters. KSO has two hours of thermal storage. The power plant is expected to generate a total of 180 GWh per year.

A low-resolution simulation of Energy3D predicts that on February 28 (close to when the Google Maps image was most likely taken) and June 28 (a winter day in the southern hemisphere), the total daily input to the solar tower (not the output of electricity generated by the turbines) is about 2.6 MWh and 1.9 MWh, respectively, as is shown in the graphs below.

The Energy3D model of the KSO can be downloaded from this web page, along with other solar power plants.

One of the unique features of Energy3D is its ability to model, design, and simulate solar power towers. Figure 1 shows the Energy3D models for six solar power towers: Gemosolar (Spain), PS10 (Spain), PS20 (Spain), Greenway (Turkey), Themis (France), and Badaling (China). To support the research and development on concentrated solar power (CSP) -- a solar power solution alternative to photovoltaic (PV) arrays that may be able to provide some baseload capacity, I have been working on creating a library of 3D models for all the existing and planned solar thermal power plants in the world. The ultimate goal is to develop Energy3D into a versatile CAD tool for all forms of CSP (and PV), based on accurate simulation of existing plants first. The acquisition of the capability of reliably modeling both CSP and PV will enable Energy3D to truly support our Solarize Your World Initiative.

This article shows a bit of progress towards that goal. I have recently added in Energy3D weather data for scores of sites that already have CSP plants or are planning to build CSP plants. Many of these new sites are in Africa, China, Europe, and South America (some of them were requested by our users in Algeria and Chile). These newly added locations bring the total number of sites supported in Energy3D to more than 250. This growing network should provide you weather data that are approximately applicable to your site (but let me know if your site is not currently covered by Energy3D to your satisfaction). When you import your Earth view in Energy3D, the software will automatically choose the supported location that is closest to your site. If there is already a power tower, you can use the length and direction of its shadow in the picture to estimate the date and time when the picture was taken -- this can be done by turning on the shadow and adjusting the date and time spinner of Energy3D until the calculated shadow approximately aligns with the real shadow. After this is done, the heliostats that you add to the scene will approximately point to the same direction as in the image.

In this article, I picked the impressive Gemosolar Thermosolar Plant near the city of Seville, Spain as a showcase. The plant has 2,650 heliostats on 520 acres of land, each of which is as large as 120 square meters. The tower is 140 meters tall. The annual output is approximately 110 GWh. With molten salt tanks, it can store up to 15 hours of energy. Using a low-resolution setting, it takes Energy3D 5-10 minutes to complete a daily simulation and up to a couple of hours to complete an annual simulation. If you can afford to wait longer, you can always increase the simulation resolution and improve the accuracy of results (e.g., more points on the reflectors better account for blocking and shadowing losses).
Posted by Charles Xie at 12:57 PM No comments: