A significant part of chemistry education is about teaching molecular structures. Before computers were widely available, many teachers used physical ball-and-stick models in the classroom. Using physical models has limitations--the variety of the molecules we can make is limited and the molecules cannot have too many atoms. When computers were powerful enough to support 3D video gaming, chemistry educators realized that they could be used to show any kind of molecules on the computer screen and there was essentially no limitation to the molecular structures that one wished to show. This method of computer-aided teaching is now commonly known as molecular visualization and is widely adopted by chemistry teachers in teaching about molecules.

There are now many molecular visualization tools freely available for education, such as Jmol, PyMOL, QuteMol, and Visual Molecular Dynamics, to name a few. All of these tools present wonderful graphics for showing molecules in 3D. When a student uses such a tool to learn a molecule's structure, he or she usually rotates the molecule to see it from different angles, zooms in and out to view different levels of details, and sometimes turns on different representations of the molecule to identify some recognizable patterns (such as a structural motif of a biomolecule like the famous DNA double helix and an electrostatic surface of a polar molecule like a water molecule).

It is our hope that through manipulating and observing these virtual molecules students will gain a lot of information about them and be able to apply the knowledge and learn to think like a chemist. There are, however, some reasonable doubts that this expected learning would spontaneously occur once students are given these tools. We observed in the classroom that there were a number of students who did not accomplish the learning goal even though they were fascinated by beautiful visualizations of molecules and played with them tirelessly. Most materials do provide instructions and background readings, but they seem to be not very effective. In the absence of an instructor nearby to explain to them what they are seeing on the screen, many students may leave the activity with no science learning accomplished.

The problem, in my opinion, partly lies in that most of these tools only present a passive learning experience. By passive I mean the molecule does not actually give any feedback to the student while he or she is interacting with it.

In the game world, a well-designed game presents an active experience to the user. While the user is playing a game, he constantly receives feedback from the system that attracts his attention and he is alwa

ys facing a challenge that he must meet to accomplish his goals.

What can we learn from games? A lot. The first thing is: imagine the molecule can respond to the student's actions. For example, the student pilots a microscopic spaceship into the molecule with a mission to fight some toxic molecules (such as carbon monoxide) and he has to carefully avoid running into vicious traps from strongly polar sites that want to catch his ship. His ship is equipped with a laser gun that can break a chemical bond and destroy an evil molecule. During his journey, he will encounter a number of puzzles and challenges that he must solve to win the game. For instance, he must maneuver his ship through a narrow passage inside a molecule in order to get to an active reaction site.

By adding these additional functionalities to a molecular visualization tool to make the molecule actively interact with the user (in addition to just passively rendering a view), we may be able to increase the learning opportunities for students. We call this idea the Smart Molecules, which is based on our NSF-funded Molecular Rover Project.

A smart molecule can also be thought of as an interactive tutor built into a visualization tool. For example, depending on where the ship is, the molecule can act like a flight controller to instruct the student where to pilot the ship. It can give hints to the user while navigating. It can provide more munition or fuel once the supplies on the ship are running low. Science lessons can be embedded into the environment to be called up for help if needed.

The Smart Molecules represents a revolutionary step forward for the use of molecular visualization tools in education. It would be interesting to see if this technology will help students learn molecular structures better in the classroom. Stay tuned.
Posted by Charles Xie at 10:16 AM 3 comments: 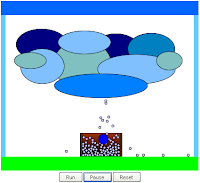 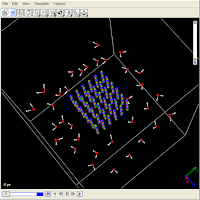 From the point of view of assessment, the richness of information expressed in these simulations has much to offer to research and evaluation about using computer simulations in the classroom. As a Chinese proverb says: "A picture is worth a thousand words," a simulation may be worth much more than a thousand words for the assessment of student learning. Ultimately, the most reliable and relevant assessment of educational simulations should use simulations themselves as the data sources. The only way to make this assessment work is to engage students to make their own simulations.
Posted by Charles Xie at 7:59 AM 2 comments: