The thermogenesis of a moth under an IR camera 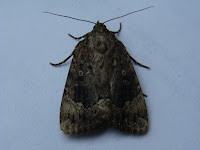 The moth (is this a winter moth -- operophtera brumata?) was kept in a glass jar. The first IR image shows that when it was idle, its body temperature is the same as the ambient temperature. This means that it does not lose energy to the environment -- a clever way for saving energy and probably protecting itself from predators that hunt by detecting thermal radiation.

However, before making a move, it needs to warm up its flying muscles (near its head where the wings are attached, called the thorax) to above 30 degrees Celsius. In this observation, the warming process took 1-2 minutes for the subject, as shown by the sequence of the IR images to the right. (Note: You may only observe this effect when the moth is energetic. A moth on the verge of death does not have enough energy to warm up.)

Note that we used the automatic color remapping, i.e., the heat map is rescaled based on the lowest and highest temperatures detected in the view. As a result, while the moth warmed up and appeared more reddish in the IR view, the background -- in contrast -- became bluer in the IR view. This, however, does not mean that the temperature of the background has decreased. This automatic remapping could create some confusion, but it is necessary in many cases, especially when you don't know what to expect. It maximizes the difference by increasing the contrast and, therefore, allows the observer to pick up subtle changes like this one.

The last image shows that, after the temperature was high enough, the moth started to move. In this particular experiment, the moth responded slowly because it could have been exhausted as it had struggled quite a bit in the jar before it was imaged.

What interests me in this experiment is thermogenesis: the process of heat production in organisms. What biochemical reactions are responsible for the thermogenesis in moths and bees? Can we learn from them to find a green way to heat our homes?