The Molecular Workbench wins a SPORE Award from the Science Magazine

The Science Magazine announced that the Molecular Workbench software has won a SPORE Award. The Science Prize for Online Resources in Education (SPORE) has been established by the American Association for the Advancement of Science to "encourage innovation and excellence in education, as well as to encourage the use of high-quality on-line resources by students, teachers, and the public."

Read our essay published in the Science Magazine.

Here is the AAAS announcement.
Posted by Charles Xie at 2:18 PM 2 comments: 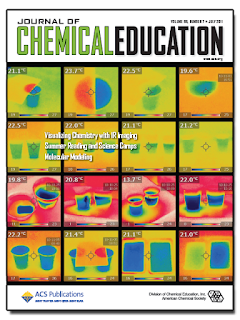 The Journal of Chemical Education, published by the American Chemical Society, selects my paper "Visualizing Chemistry with Infrared Imaging" as the cover article on the July 2011 issue. The IR experiments presented in the paper were described as "captivating, intriguing, and thought-provoking."

Scientists have long relied on powerful imaging techniques to
see things invisible to the naked eye and thus advance
science. IR imaging is one of the few scientific imaging tools that can be easily used by anyone without complicated setup and calibration. And the price for an affordable IR camera has recently fallen below $900. This is a truly transformative tool that will empower students to learn and discover deep science from everyday life. I have shown many examples in this blog.

Every time I did some experiments with this wonderful tool, there was always something that surprised me. Even a humble leaf from a plant in my office shows a lot of things I don't really have a clue (I will blog more about biological applications later). Being a scientist, I intuitively feel that some of the surprises are not simple at all. Behind them there is very deep science that might have never been discovered before. It is a lot of fun to "crack" the scientific secrets in these surprises.

I hope every student would have the same opportunity to have fun with science as I have. Discovery should be an important part of science in schools.
Posted by Charles Xie at 8:18 AM No comments:

Infrared (IR) thermography is increasingly used to carry out home energy inspection. In theory, it can be used to identify energy leaks by looking at the temperature distribution on the building envelope. 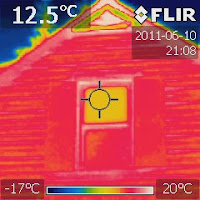 In practice, however, it can be tricky. One of the problems that IR users commonly encounter is optical illusion. After all, what an IR camera detects is IR radiations, which is light. So we are subject to the rules of optics. 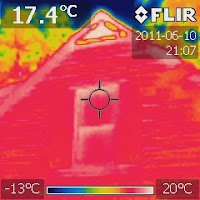 To illustrate my point, I took a few IR images of my house at around 9pm at this windless summer night. I looked at a closed window from two different angles and my IR images show that at one angle, the upper pane of the window appeared to be cooler than the lower pane (Figure 1). When I saw this, I knew this was hardly possible, because it was against natural convection--there is no way that the upper pane of the window would be cooler than the lower pane in a house that wasn't being heated or cooled.

Looking at the window from another angle, there was almost no temperature difference (Figure 2). Notice that from both angles, the ridge vent looked pretty hot, of course, after heating by the sun the whole summer day.

So what is it? 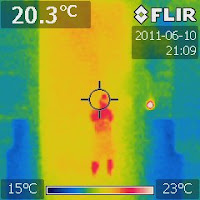 This IR illusion is caused by the glass of the window. Glass not only emits IR radiations but also reflects them. Figure 3 shows the reflection of my body radiation superposed to the IR emission of a glass door.

So what did the upper pane of the window appear cooler from the first angle? This is because at that angle, it happened to reflect the night sky. And the night sky is seen by an IR camera to be very cold (below 0°C; explaining this needs another blog article). This reflection was added to the IR emission of the upper pane and caused it to look cooler than it should be. 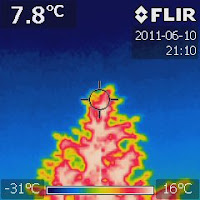 The lesson learned from this example is that you have to know a lot of science in order not to be deceived by what you see through an IR camera. An IR camera is a powerful tool only in the hand of a person with the knowledge to interpret the image correctly. Having an IR camera sounds snazzy, but it does not necessarily mean you are spared from learning what it can do and cannot do or when and where it can fool you. To some extent, the business of IR thermography is not unlike the business of a detective. 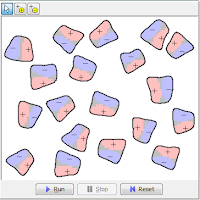 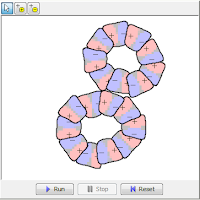