A complete 3D model of the PS20 solar power plant 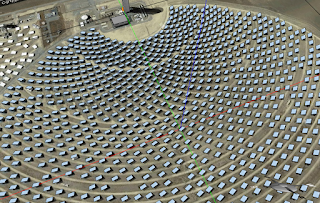 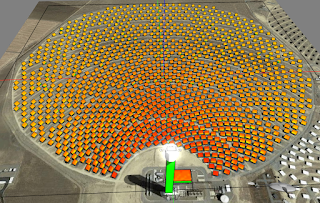 According to Wikipedia, the 20 MW PS20 Solar Power Plant in Seville, Spain consists of a solar field of 1,255 heliostats. Each heliostat, with a surface area of 120 square meters(!), automatically tracks the sun on two axes and reflects the solar radiation it receives onto the central receiver, located at the top of a tower that is as tall as 165 meters. The concentrated heat vaporizes water and produces steam that drives a turbine to generate electricity. The Wikipedia page mentions that PS20 uses a thermal storage system, but it is not clear whether it is a molten salt tank or not.

PS20 generates about 48,000 MWh per year, or roughly 132 MWh per day on average without considering seasonal variations. 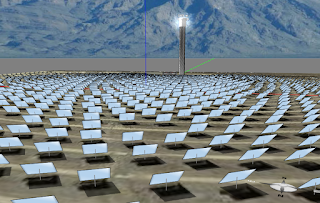 The full 3D model of the PS20 plant is now available in Energy3D and can be downloaded from http://energy.concord.org/energy3d/designs/ps20-solar-tower.ng3. While it generally costs hundreds of millions of dollars to design and build such a futuristic power plant, it costs absolutely nothing to do so in the virtual space of Energy3D. In a way, Energy3D gives everyone, especially those in developing nations, a powerful tool to explore the solar potential of their regions. Whether you live in a desert or on the coast, near or far away from the equator, in cities or rural areas, you can imagine all sorts of possibilities with it.

I am working on heat transfer, energy conversion, and thermal storage models that can predict the electricity generation accurately. Right now, Energy3D estimates the raw solar radiation input to the receiver on June 22 to be about 656 MWh, considering all the shadowing and blocking losses. If the system efficiency of heat transfer and energy conversion is in the range of 30-50%, then Energy3D's prediction will fall into a reasonable range.
Posted by Charles Xie at 6:04 PM