Designing on lot maps in Energy3D 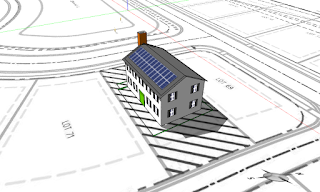 Energy3D allows users to import an Earth View image from Google Maps and then design 3D structures on top of it. The image provides the reference frame, boundary lines, and other visual aids for getting the geometry right. What if there is no Google Map image, or the Google Map image is outdated, or you simply want to draw on a different substrate other than a Google Map image? 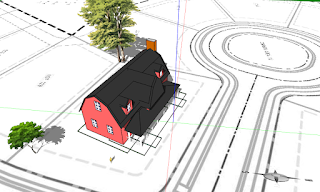 Bob Loy, a teacher at Creekside Middle School in Carmel, Indiana, has such a situation. His school is working with a builder to engage young students to design new constructions in their areas. His goal is for them to design houses that fit on assigned lots planned by the builder and then make them as energy-efficient as possible by applying all sorts of solutions, including insulation, passive solar strategies, and solar panel technologies. 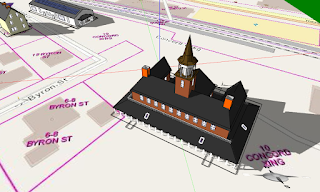 Upon his request, I have added a new feature to Energy3D (V6.2.7) to enable users to import an image from a file to serve as the ground for designing a building, a solar farm, or anything made possible by Energy3D.

Since users can import any image that represents any size in the real world, it is their responsibilities to make sure that the dimension and orientation of the image that appears as the ground in an Energy3D model is accurate. Setting the correct dimension can be done by rescaling the image after it has been imported. There are some other requirements of such images, though. For instance, they have to be a square image (its width and height must be the same) with a reasonably high resolution (otherwise they will appear to be too blurry to look once they are transformed into 3D textures). Users must know the scale of such an image, i.e., the exact length in the real world that a unit length in the image represents. Once the image is inside Energy3D, users should measure its width or height within Energy3D and then rescale the image to make sure that the measurement matches the value in the real world. Currently one can use a foundation object in Energy3D as a ruler, but a real ruler should and will be added in a future version to measure any distance in a more intuitive manner.
Posted by Charles Xie at 10:08 PM