A perfect storm in a cup of salt water? 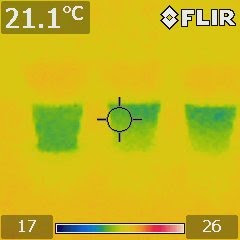 I was bothered by an experiment I did recently about the temperature distribution in a cup of salt solution. I added a few spoons of table salt and baking soda in two cups of water to create two saturated solutions. Then I left them sit there for a few days, along with a cup of plain water. When I came back and aimed my infrared camera at them, I saw something quite puzzling: in the two cups of solution, the bottoms were always about 0.5°C warmer than the tops (see the IR image above)! In contrast, a cup of plain water did not show this temperature difference--the temperature was the same everywhere just as expected.

Exactly what kind of chemical force sets up this temperature gradient? We all know that warmer water should rise and colder water should sink, and eventually the convection stops and the temperature becomes the same everywhere. But this is apparently not true in the presence of salt solute. I feel this has to do with gravity. It must be gravity that causes a concentration gradient of the solute, which in turn results in the temperature gradient. But I am not sure how exactly this happens. I have no idea what energy source feeds this temperature gradient. Don't forget that the cup material tends to eliminate it through heat conduction and the air through convection. There must be an invisible hand that counters all these thermodynamic forces. This seems pretty amazing to me.

To make sure that this is not an effect of infrared radiation, I confirmed the result by sticking a sensitive temperature probe into the solution and moved it up an down for a few times. The image below is the 60-second result recorded by the temperature probe, which clearly agrees with the I 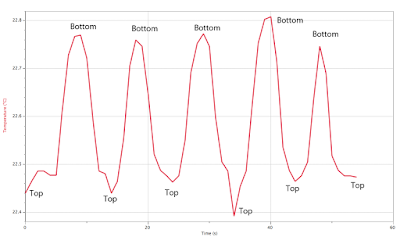 This is an example that, once again, shows the power of infrared imaging. I would not have noticed there was such a temperature gradient in a solution without my infrared camera. The infrared camera, in just one simple shot, captured the salient and subtle details that reveal very complex physics, which I still do not understand.

What is the significance of this result rather than a tempest in a teacup? Might the temperature gradient be used to generate a voltage gradient, which in turn generates electricity? In other words, might this be some kind of battery that is a 100% clean energy source?

The ocean is a gigantic solution of salt. Half Celsius of temperature difference in the ocean translates into an enormous amount of energy. Might there be such an effect in the ocean?

Followups:
1) Evaporation is a driving force
2) The temperature gradient exists only in a saturated solution
3) Mystery solved?
4) Visualizing vapor pressure depression
5) Salinity gradient vs. temperature gradient
6) An evidence from an ice cube
Posted by Charles Xie at 6:37 PM

That's interesting. The system is out of thermal equilibrium for some reason.

Perhaps it is due to concentration dependent differences in heat capacities. If the temperature of the room is fluctuating, volumes with higher heat capacity should be warmer.

Perhaps a simulation could enlighten us? :)

The temperature in the room is very stable, at least within 60 seconds while the temperature sensor was moved up and down. The effect of heat capacity is usually very slow. It takes a long time for the environment to warm up or cool down a cup of water.

Awesome observation and idea for energy source. How could you make use of it?

The temperature gradient is caused by two things, I guess:
1) Evaporation draws energy from the surface of the water so that it gets colder
2) There is a salt gradient in the cup that prevents the water to mix, as the saltest water is heaviest.

As water evaporates, the water in the surface gets saltier, and will start to sink, but that process goes slower than the first, so the surface water will be cooler.