Evaporation is a driving force 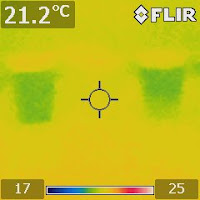 This is the first followup of the blog article last week "A perfect storm in a cup of salt water?".

Several people including Bob Tinker, John Loosmann, and Einar Berg suggested that it was the evaporation of water that drives the observed persisting temperature gradient. It turned out that they were right. After sealing the salt cup with plastic wrap and leaving the three cups for 24 hours, their thermogram shows the sealed cup vanishes from the infrared image (see the image to the right--the sealed salt water cup is in the middle, which is invisible). This means that the temperature everywhere in the cup is the same as the ambient temperature. The infrared image also shows the baking soda cup, which has not been sealed, continues to show a temperature gradient. 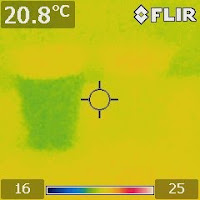 Now, we have to explain why the pure water cup shows a cool infrared signature. So I added a sealed pure water cup. The thermogram to the right shows that the sealed pure water cup vanishes in the infrared image (the sealed water cup is on the right of the thermogram), whereas the open pure water cup shows a cooler image for the part filled with water. Interestingly enough, the upper part of the cup that does not have water contact is constantly almost 1°C warmer than the filled part. This temperature gradient is clearly shown in the infrared image below. Why is the temperature gradient across the water line on the surface of the plastic cup so sharp?

Now go back to the evaporative updraft force. At this point, we only know that cutting off evaporation shuts down the energy loop. We still do not know how what happens under the water line in the salt water cup. The following graph clearly shows that this effect exists in not only a salt solution, but also a baking soda solution and a sugar solution. 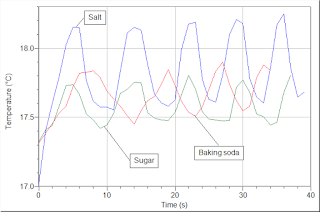 We can suspect that the ion concentration gradient is another driving force for this energy circuit. This will be our next step of investigation. Stay tuned.