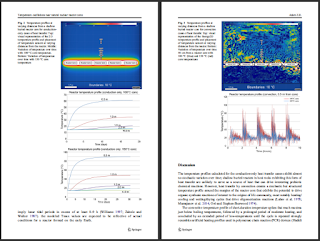 How do prebiotic oligomer synthesis reactions, crucial to the origins of life, occur in natural geological conditions? These reactions could happen through certain thermal cycles driven by natural nuclear reactors in the Precambrian period. Origins of Life and Evolution of Biospheres, the Journal of the International Astrobiology Society,  recently published a research paper by Dr. Zachary R. Adam from the Department of Earth and Planetary Sciences, Harvard University, titled "Temperature oscillations near natural nuclear reactor cores and the potential for prebiotic oligomer synthesis." The paper reported a theoretical study based on our Energy2D software.

The critical finding of the paper is that Energy2D models indicate that "water-moderated, convectively-cooled natural fission reactors in porous host rocks create temperature oscillations that resemble those employed in polymerase chain reaction (PCR) devices to artificially amplify oligonucleotides." The simulations show that "this temperature profile is characterized by short-duration pulses up to 70–100 °C, followed by a sustained period of temperatures in the range of 30–70 °C, and finally a period of relaxation to ambient temperatures until the cycle is restarted by a fresh influx of pore water."

This study concludes that "for a given reactor configuration, temperature maxima and the time required to relax to ambient temperatures depend most strongly on the aggregate effect of host rock permeability in decreasing the thermal expansion and increasing the viscosity and evaporation temperature of the pore fluids. Once formed, fission-fueled reactors can sustain multi-kilowatt-level power production for 105–106 years, ensuring microenvironmental longevity and chemical output."

This is the FOURTH published scientific research paper in a year -- as far as I know -- that involves the applications of Energy2D. This is a strong endorsement of its scientific validity from the science community. The software has impacted science, engineering, and education as I envisioned when starting its development six years ago. In the new year, the development will continue in my spare time. A recent update is that the latest version of Energy2D has provided both Windows and Mac installers that do not require Java to run, potentially making it easier for people to install and update the program.
Posted by Charles Xie at 9:11 PM