I was recently involved in a few pilot field tests in which high school students were challenged to build an energy efficient scale model house. We observed something amazing. Initially, I was worried that students may end up building houses that are so similar to each other that the entire research will be invalidated. But that did not happen.

In one field test, a group of students created a pyramid and discovered an eff

ect that I would call "a heat funnel." The images to the right show the pyramid heated by a 40W light bulb on the floor inside and an infrared signature showing the equilibrium temperature distribution. The students observed that the temperature at the tip of the pyramid reached nearly 150°C--enough to boil water! This amazing heating effect is due to the fact that hot air rises to the top in a way similar to how water flows down in a funnel. Just like the bottleneck of the funnel records the highest speed of water flow, the top of the heat funnel records the highest temperature of heat flow. The water funnel is usually explained using the conservation of mass, whereas the heat funnel can be explained using the conservation of energy. The density of thermal energy must increase when the heat conduit narrows in order for energy to conserve. Therefore, the temperature at the tip can be very high because its cross section is very small.

Although they did not expect the temperature at the tip to be so high, the students were fully aware of the convection effect, because they cut some slits at the bottom of the pyramid to let fresh air in in order to keep the air flow through it (you can see a slit from the photo on the left). This is the stack effect that drives a chimney. At the top of the pyramid, the hot air just exits through the tip, which naturally has small passages for the air because it was not perfectly sealed. Had students had a sensitive air speed meter, they would have observed a small but appreciable jet stream coming out from the tip (would they?), just like steam from the vent of a cooking pot. 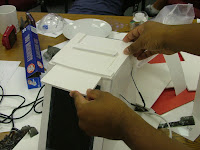 In another field test, a group of students created a sliding roof that can provide overhang shading in summer and increase roof insulation in winter (see the images to the right). 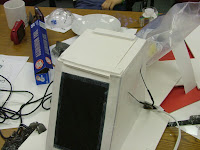 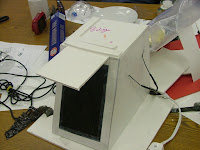 I must confess that, as a physicist, I have never heard of or thought of the heat funnel effect until I saw it in the classroom. Pondering about this effect, I realized that it might be non-trivial and could have some engineering implications. For example, might this effect be used to build some kind of solar updraft pyramid for generating electricity? I have heard that in the US there are huge solar power plants that utilize the optical focus effect to create high temperature to boil water, which in turn creates steam to push an electrical generator. How about a heat funnel generator that will work sunny or cloudy?

The sliding roof invention is impressive in that the students figured out an engineering solution that solves two problems: winter insulation and summer shading. The students also had an idea of putting solar panels on the sliding roof and the base roof. This smart design, which increases the solar reception area, will turn the unwanted solar heat into electricity instead of reflecting it off. This is not just a single solution that solves one problem. This is a stone that kills three birds. Isn't this exactly what we strive to teach in our engineering classes?

These inventions of students should convince you that students are not just learners. If we give them creative tools and interesting projects, they can be inventors as well. Sometimes, their inventions will surprise even seasoned scientists and engineers. Science and engineering education should make more opportunities for these young inventors to rise to the top.
Posted by Charles Xie at 8:43 PM 2 comments: